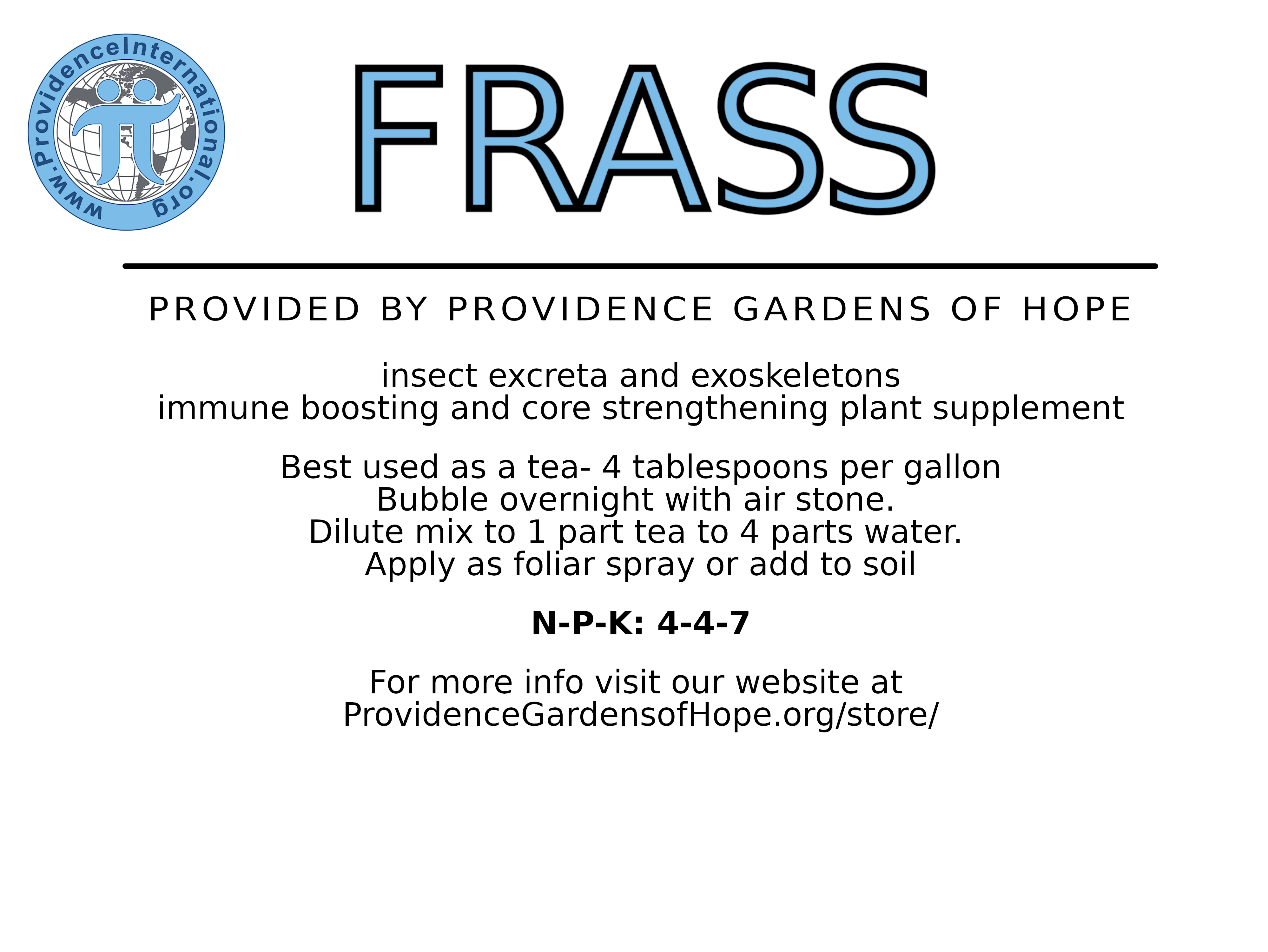 Frass is a combination of insect exoskeletons and excretions (bug poop).  On a mineral level, frass is a substance rich in chitin and chitosan, beneficial microorganisms, as well as many macro and micronutrients essential to healthy plant growth.  Please see the table below for a full mineral composition analysis.

Chitin is a natural material, similar to cellulose, that is found in several different species of animals and insects. Primarily used as a structural material by the animals, chitin is also a raw material for a product called chitosan, which is also useful for human industrial purposes.  In a living organism, chitin acts as structural material, to help keep the body of the organism safe and allow the various parts of the body to move around independently. Chemically, the molecule is a polysaccharide, which is a long chain of sugars, one after the other. Chitin and chitosan share much of the same molecular formula, with a few differences.

Chitin presence stimulates the natural immune responses in plants.  Although plants lack chitin, they do secrete enzymes (chitinases) that synthesize chitin in fungal cell walls.  The overexpression of chitinase in plants leads to enhanced resistance to fungal pathogens.  Recent studies have demonstrated the presence of chitin is a potent regulator of plant gene expression, especially in relation to immunity responses.  In essence, the plant is stimulated to produce natural toxins which fend off pests as well as fungal pathogens.

Due to the presence of chitin in the soil, adding frass will naturally stimulate the plants to defend against powdery mildew, botrytis (grey mold), early and late blight, fungal pathogens in the root zone (root rot), and root-feeding nematodes.  Frass simultaneously stimulates the propagation of beneficial microorganisms, insects, and beneficial nematodes.

Frass is not an insecticide, but its presence produces the same results.  Insect pheromones and plant semiochemicals synergistically defend the plant either by repelling organisms detrimental to the plant, or by attracting natural predators of those predators and parasites that would otherwise harm the plant.

Plant semiochemicals are known to produce a wide range of behavioral responses in insects. Some insects sequester or acquire host plant compounds and use them as sex pheromones or sex pheromone precursors. Other insects produce or release sex pheromones in response to specific host plant cues, and chemicals from host plants often synergistically enhance the response of an insect to sex pheromones. Plant volatiles can also have inhibitory or repellent effects that interrupt insect responses to pheromones and attract predators and parasitoids to the attacking species after herbivory injury. Frass enables different interactions between plant semiochemicals and insect pheromones, resulting in completely natural, more efficient and reliable pest control.

Frass nutrient and mineral values change depending on sourcing, but typically ranges in N-P-K values of 2-2-2 to 4-4-4.  The frass provided by Providence International has the following content values:

One of the greatest benefits of frass soil enrichment is the bolstering of beneficial organisms in symbiotic relationships with plants.  This begins in the soil, enabling the propagation of nematodes and microorganisms that then enable nutrient uptake and fend away harmful organisms.

Be sure to always use dechlorinated water when using frass applications.  This practice is strongly recommended for all hydration of soil and grow media.

Root Drench and Top Dressing:  Mix ½ cup of frass per 1 gallon of water.  Apply within 2 hours of mixing, or store refrigerated for up to one week.

Potting, Soil and Grow Media (i.e. coco) Mix:  Use ½ cup of frass per cubic foot of soil or media.

Compost Tea:  Add 1 tablespoon of frass per one gallon of tea.  Aerate for 24-72 hours to achieve fungal dominance.